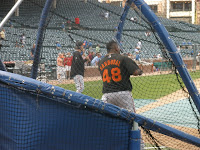 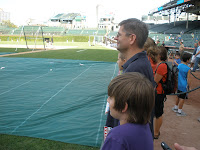 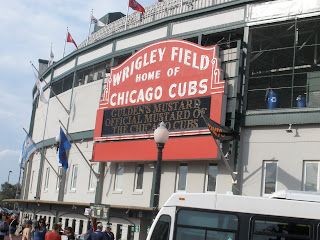 We went back and forth. Lake Zurich Cougars or Lake County Stars? It was a tough call for both Brady and us. Which traveling baseball team should we select? One day it was the Cougars and the next it was the Stars. No matter which way we chose someone would be mad at us. When we finally decided on the Stars there was something dangling at the bottom of the emails. Save Sept. 23 for a Cubs game with the Stars team. Yeah, with free parking, free tickets, free food and drink. Also, pre game we went down on the field. There was a brief autograph session. I'm no Cubs fan but for a few innings we even sat in the front row down by the field. Back in my Orioles days, I was on the field more than a few times but it was still fun for me and Brady. What kind of a traveling baseball team did we sign up for? Should we expect plane tickets for games? The suite we were sitting in (can't give away my sources) was filled with snacks and drinks and meals for the boys. Also, a dessert table went wheeling by. Oh, gosh. By the way, the Cubs were slaughtered.
Posted by Let's Find H-Man A Wife at 7:54 AM 1 comment: 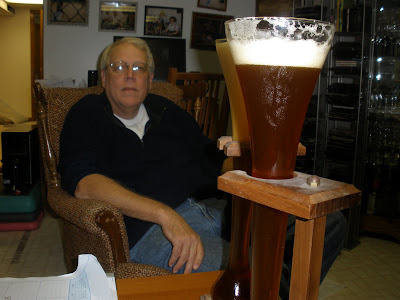 Dave didn't arrive until 11 p.m. No matter, the beers were chilling in the shrine. I opted for Itunes to play random songs but after a while went back to the 200 CD player.
There wasn't always a shrine. My great friend Dave would come to my apartment and I would serve fine beers and we would listen to tunes. One time, I played 6 Grateful Dead CD's and he left exactly when the last song ended. Anyway, the mission of these shrine sessions is a search for big thoughts.
Dave is now working on hypnosis. He's trying to market young tennis phenoms and help them with the mental part of the game. I always go back to a great Superman episode when a crooked hypnotist puts people in trances and made them rob folks. I'm pretty sure Dave doesn't do that. Do I get a free therapy session when Dave arrives? It's a big odd as we drink alcohol and listen to songs at the same time.
These sessions, over I'm guessing about 20 years, are just great. It's nice to sit around, drinking fine ales, and laughing. Oh, Dave does sleep on the sofa so there is no drinking and driving at night. When the boys were young, he would chase them around the house in the morning. That part of the deal has passed over. We had just one very large IPA and a glass of cognac.
No, you can't steal Dave from my shrine sessions but if you know someone who needs help with their head, contact Dave at Bharpd@gmail.com
Posted by Let's Find H-Man A Wife at 7:27 AM No comments: 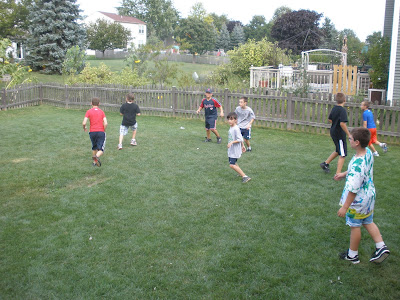 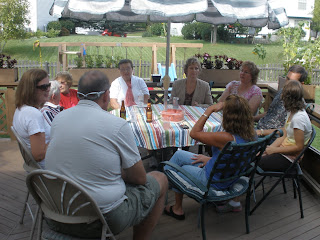 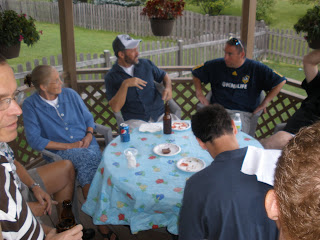 Of course the first song of this party is "Life of Riley" by the Lightning Seeds. On Labor Day Sunday, we hosted the ninth annual Life of Riley party. Neither Eileen or I could figure out who exactly had the idea for the party but it sure is fun. The first party in 2000 celebrated the comeback of our boy Riley. Born with a bleed on the brain, he was in intensive care for 15 days. I still recall one surgeon commenting when he saw the bleed on our baby's head. "It is not necessarily devastating."
Riley has come all the way back and every Labor Day Sunday we host a large party to celebrate that fact. Now the party has a life of its own. Our friend Marie http://fromsuburbia.blogspot.com, husband Computer John and children have never missed this party. She even noted she celebrated by dropping a kidney stone in our downstairs bathroom. Yes, she kept it. I just love visiting with all the different folks. I give tours of my shrine to those who are interested. Dave and I even shared a large beer in the shrine. Eileen made her vodka limeades while I gave out a Raspberry Rum drink that was great. There were tons of micro brews around for folks as well. It did have the nerve to rain just a bit but no complaints. We are still munching on the leftover chicken.
Posted by Let's Find H-Man A Wife at 11:10 AM 1 comment: