This story ran in the Pioneer Press around 1992. It was before email so I don't know how many people read it.
So here it goes again. It's Brooklyn, New York sometime in the late 1960s. I was visiting my three cousins and my Aunt Judy. Back in those days, the meal was a formality. Eat a few bites, be nice, and then make the dash to Jahn's. Granted, it was a eight-block walk to Jahn's but that was part of the fun. Huge dishes of ice cream awaited us.
Nothing was out of the ordinary when we arrived at this Flatbush Avenue establishment. Of course, cousin Michael and I had no problems inhaling our huge portions. Mike's younger brother, David, wasn't so lucky. His dish was still half full but it was no problem as Jahn's loaded his leftovers into a box and bagged it for David to bring home.
And then the race home started. Naturally, Michael and I ran ahead of David (now a Florida policeman). David wasn't intimidated and stayed close behind. I can see it today as his bag was swinging as he was running.
And then I heard screaming. The damn bag had broken. I backtracked a few steps and spotted this middle-aged woman yelling at David. I looked back at her husband and he really wasn't there. His face was completely covered in strawberries and melted ice cream. I wrote in the column that no doubt he was thinking he had been killed. He pulled out his handkerchief as his face dripped on the sidewalk. The argument between woman and child ensued. After a moment or two, I politely interrupted the fracas by saying excuse me a few times. Both the woman and David turned to me and asked what was up. I said, "We are leaving." And then quielty told David to run.
She said no. David said yes. And we ran down the street as fast as we could.
Posted by Let's Find H-Man A Wife at 7:20 PM No comments:

Dave is my best buddy. My friend Dan introduced us back in 1985 or so. And when I moved to Chicago from DC we hung out together. We started shrine sessions a good 15 years ago where we would drink good brews and look for big thoughts. Dave was my best man at my wedding.
We take trips to the Brewers games. Dan, Dave and I visit towns and find good places to eat and drink. Best of all, Dave would come to my house and chase our boys around until they grew tired and had to go to bed. My children think of Dave as a member of the family. And so do I.
And when I worked in the office, Dave and I would chat every Monday night for years. And now it's silence.
Dan notices it, too. Dave doesn't return calls. Now to be fair, Dave was diagnosed with an irregular heart beat. We did have a long conversation about that.
It's May and I've talked to Dave maybe three times all year. That's unheard of. Where are you Dave? Come back to the family. We will cheer you up.
Posted by Let's Find H-Man A Wife at 7:35 AM 4 comments: 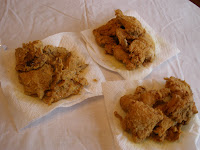 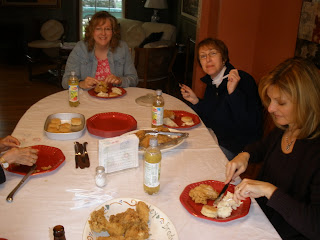 Found this recipe in the great magazine "Saveur" It carried a picture of a black waiter delivering a plate of fried chicken and fixins to customers. I have gone through several fried chicken recipes and found some of them to be mediocre. This one is great.
Heat Olive Oil to 375 degrees. Dip the chicken in egg whites. Transfer to plate of 1/2 c flour, 1/2 c matzo meal and 1/2 t baking powder. Fry 12-14 minutes. Great crust. The tricky part is dipping it in the spice. I've made it too salty at times but not this time. If anything it wasn't salty enough.

Thanks to the guests Marie, Helen, Teresa, Julene and Mom and Ed.
Posted by Let's Find H-Man A Wife at 1:56 PM 5 comments: