The art of a game-winning shot My friend Dan said it best when he texted me stating that every kid should have that kind of experience.

Basketball game tied with seven seconds to play. Brady's YMCA team had the ball. Brady (13 years old) drove down court. Five, four, three, two. Brady flips a shot that goes swish. Game over. See ya. My oldest child did make it just past half court when he was knocked to the floor by his excited teammates.

Now where is the video? Or the close-up photos? Sorry I can't do those things. His brother, Riley, called home to scream at his mother about his older brother winning a game. I called Grandpa Maloney and gave him play by play of the last seconds. I texted to whomever would listen.

It's a huge deal to win a game like that. It's something Brady should never forget.

Is sports the only place where it can happen? You can get a standing ovation for a being in play or for performing a music piece. But it isn't the same. Sports allows us this opportunity for the last-second shot or the game-winning homer.

Riley asked before the game if Brady won the game what would that get him. I said a coke. Instead, he opted for Dr. Pepper. We found a cool pizza place in DuPage County where we made pigs of ourselves eating pizza and wings.

When Brady got to baseball practice that night, a parent had already heard the news of the game-winning shot. That was a good day to be a parent.
Posted by Let's Find H-Man A Wife at 10:05 AM 2 comments:

Another one of my favorite places 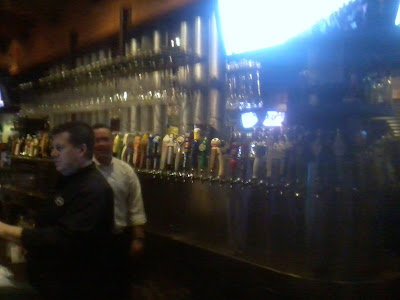 I must admit I was secretly stashing away gift cards to this place. I can't recall where I first found the Yard House in Glenview. It was probably TJ since he lives right around the block from it.
It's really a great place with unlimited brews. On Friday night, I, the IPA freak, found a wonderful one in Three Floyds Dreadnaught. It was wonderous with the Belgian tinges in the hop heavy brew. I had just two as that was enough. Plus, I think this lovely liquid hits close to 10 percent alcohol.

TJ and Bob joined me for drinks and appetizers. The last time I was there followed by layoff from the 20-year old job. I drank too much that day. No doubt I needed to do that following the job loss. I was well aware I was drunk while driving but I blasted tunes and stayed safe on the road. Yikes.

Anyway, the Yard House must stock more than 100 beers on tap and most of them I would gladly sample. It's a great place to celebrate and I guess drown your sorrows as well. This, time, I finished the night with a cool glass of water.
Posted by Let's Find H-Man A Wife at 12:52 PM No comments: