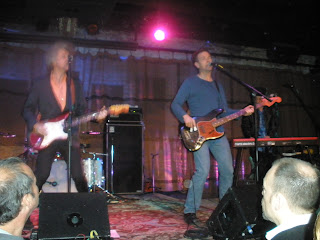 The amazing thing here is the lead singer (Dan Zanes) of the great Boston band, "The Del Fuegos" actually sang children's songs at Nolan's day care back when he was quite young. Sure, I recalled this band with their great songs, "The Longest Day, Don't Run Wild and I Still Want You."

But they broke up way back when. I purchased their so-called big hits on CD and played them for the boys when they were young.

And on Sunday, Eileen and I drove down to Evanston to see the Del Fuegos. They had reformed. We actually had the GPS but still couldn't find Space until the band had already come out. No matter they played a good two hours. And I was singing in the background all night long. At my seat, of course.

I have that Longest Day album at home and see that I paid a whopping 25 cents for it back in the 80s. I think Eileen liked it, too, but it was a late night for her. And get this, neither of us had anything to drink.

As I write this, I have the Del Fuegos blasting in the shrine. Thanks to I-Tunes. Maybe if I was younger, I would have followed the tour that hits Milwaukee, St. Louis and Minnepolis. No, I have better things to do.
Posted by Let's Find H-Man A Wife at 10:16 AM 1 comment:

Be careful or you will break your neck 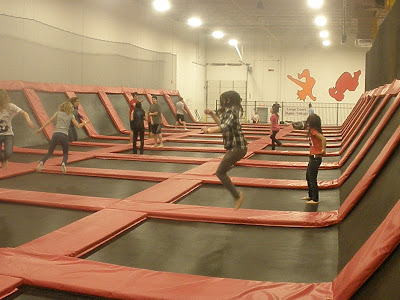 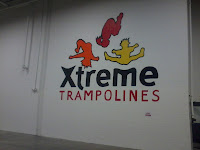 Those are real comforting signs at X-treme Trampoline in Buffalo Grove. If you jump this way, you will break your neck. If you land that way, your back will be broken. A broken back? That has to be a serious pain. And this is all in the name of fun?

On Saturday, Brady took three of his friends along with Riley, Nolan and I to Buffalo Grove for two hours of tumbling and leaping on trampolines. Of course, I just read the news on my phone as the boys got their exercise. This is the place where you have to sign a waiver before jumping on the mats. Now its true there is a lawyer in this house but I don't think that waiver is worth much if someone actually gets killed over there. They are still going to get sued.

Enough of that legal stuff. No one got banged up. They all had a good time. I watched Nolan play dodge ball on the trampoline. He told me later how he had made a nice play against two older kids.

I wonder if they had such a place like this when I was young. I probably wouldn't go as I'm not the jumping type.
Posted by Let's Find H-Man A Wife at 4:44 PM 2 comments: