What the heck was I thinking? 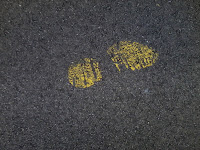 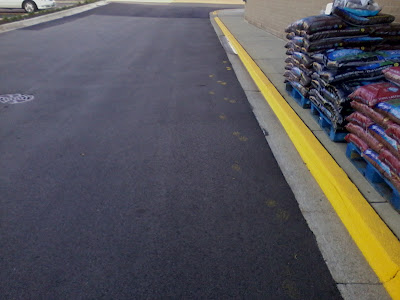 Off the record some of the guys at the dorm called me Spacey. That of course was a compliment to my great imagination.
But this was just a typical day in Lake Zurich. I walked to Wal-Mart and barely noticed as some painters worked on the sidewalk by Sears Hardware. Naturally I came home the same way. And then I walked on the wet paint. I didn't really pay attention until I saw my footprints on the road. Oh, gosh.
Did I care that I made a mess on the road? Not really but what about the bottom of my shoes?
So I went and took pictures of my accident today. I took them with my camera phone. And then I noticed one of the co-owners of the store coming by with a cigarette in her hand. I had my headphones on and listening to the IPOD so I didn't notice if she had any comment about the photos. I figured she was doomed to a short life anyway with that smoking gun in hand. But I truly hope she doesn't read this blog.
Posted by Let's Find H-Man A Wife at 11:33 AM No comments:

To the Evanston Hospital and spices to boot 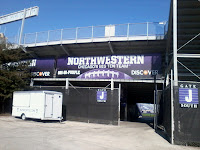 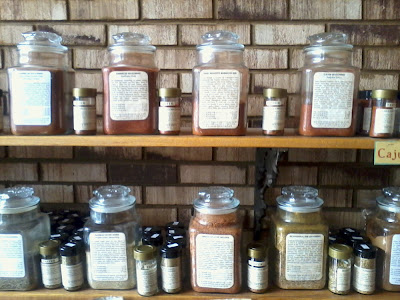 Once a year Mom returns to Evanston Hospital for a check-up. It is the site that she had her leaky heart repaired. So during her two-hour appointment, I take my IPOD and walk by Northwestern's football field. I'm on a mission. I'm off to the Evanston Spice House.

I told the guy in the store that this was kind of a religious experience for me. That was a stretch. It's not like looking for obscure beers. But this store has it all for spice lovers. Of course, I picked up a hot cocoa mix that they make up.

What was I really looking for? I'm sure a decent garlic mixture for cooking would be nice. I did find some simple granulated garlic but kept on moving around the store. They might have a few too many employees for such a specialty shop. Does one girl just worked on Eastern Chili and another does Chicago neighborhood spices? Makes you wonder.

They do have taster containers but I would rather just spell them. I finally found the the shelf that had a better collection of garlic. I opted for some garlic with a few different salts. It's called Fancy Garlic Salt. It says kosher salt, green onion flakes and plenty of garlic. That's 3 oz bottle for four bucks.

Of course I picked up freeze dried shallots for Nolan's chicken. That's the olive oil, rosemary and potatoes recipe. And finally I chose Ozark Seasoning. It says it's for fried chicken. I like dipping various seafood and meats in spices like this.

I recall when one of Eileen's friends came to visit. I made my shrimp with creole spice and various salts. Riley washed off the seasoning and ate away. Kim, Eileen's friend, wrote that it was the best shrimp she had ever had and called Riley silly for washing it off. Oh, well.

Mom says she is done with Evanston Hospital. But what about my spices? Field trip anyone?
Posted by Let's Find H-Man A Wife at 9:31 AM 2 comments: