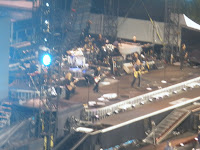 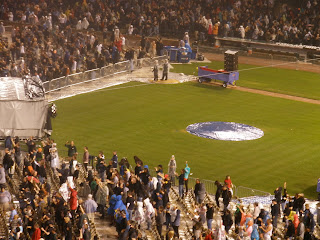 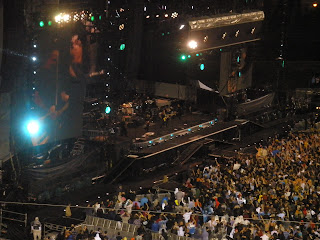 Spoiled is what I was. H-Man, who this blog is named for, was not only a swell fellow but he knew people. Or rather his dad did. His father's best friend was the late Abe Pollin. That man owned the Capital Centre in Landover, Maryland. So what did that mean to me? It was all the concerts and basketball games I could go to for free. Heck, I could do that. So it was time to go see Bruce Springsteen back in 1979-1981. Sure I would go to those shows for free. I loved the "Boss" But temptation took me over. H-Man would pick the lock on the owner's liquor box and I would indulge. Or rather over-indulge. Twice for Springsteen, I passed out by drinking too much. Oh, well, I was young back then.

Now being respectable in my middle age, I bought Springsteen tickets for Eileen's birthday in July. We went with another couple on Saturday night at Wrigley Field, home of the Cubs. Not free tickets; not even close. And no liquor box to pick open.

So we drove down to Chicago and met our friends who were staying at a condo. We went out for a quick dinner and then caught two trains to Wrigley Field. Made it in time to beat Springsteen on stage. Of course he was terrific. We didn't hear Glory Days nor the haunting River but he played everything else. It even rained hard but the Boss never moved. He played from 8 p.m. to well after 11. The sound in the ballpark was terrific.

And here I thought I was burned out by the songs from Born to Run and Darkness on the Edge of Town. Not a chance, and in better news, I was able to walk out under my own power.