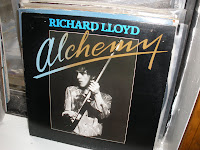 I can remember the first album I ever bought. It was Neil Diamond Gold. It had Cherry, Cherry and Sweet Caroline plus a great live version of Brother Love's Traveling Show. "Grab the old ladies everyone goes, Brother's Love's Show."
I spent so much time searching old record stores. Finding gems and disasters. I bought Seals and Crofts "Diamond Girl" in Columbia, South Carolina while half-heartily looking at the campus. And then my friend Joel said that two rows of people at the Seals and Crofts concert were found fast asleep and I felt sad.
In college, I used to stack 6 albums on top of each other and the fancy Panasonic player would drop them one at a time. I would do this at night and hear the first few songs of the first album and then fall dead asleep as the music played all night long. Can you imagine letting the albums drop on top of each other?
When CD's arrived and rocked the record world, I ran into a record store guy who swore that records clearly sounded better that those evil CD's. I wanted to agree with him but he was being too serious.
And then it came time to dump my 1,000 records. I took them to a store in Evanston. I got about 25 bucks. Twenty-five bucks for all those records. All that music. All that time. All that money.
Posted by Let's Find H-Man A Wife at 10:54 AM