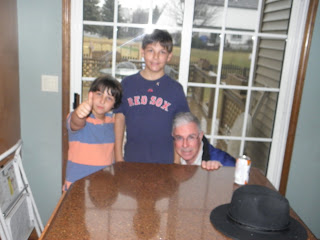 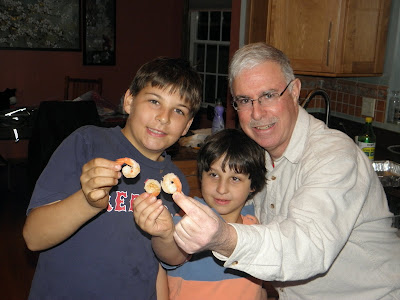 H-Man, the dentist does get to the Chicago area for dental talk a few times a year. He arrived on St. Pat's Day and I must be getting old because I didn't want to drive on drunken driving night. So, I decided to pick him up in Chicago on rainy Sunday. I didn't mind the drive since it allowed me to crank tunes. The IPOD sounds great at times in my old car.

H was still trying to arrange a flight while I parked on the street awaiting him.

It rained some more on the way to Lake Zurich. No matter, we told jokes and had a blast. He was in the shrine for awhile. He saw a picture of himself in the shrine while he had a beard. He had no memory of it. Of course the photo was taken 27 years ago.

A reggae song came on in the shrine. It brought back memories when I lived in his DC house. I was playing reggae on my record player when H-Man came home. He seemed to getting into the music when he turned and uttered, "I'm listening for the scratches."

He then came upstairs for some good shrimp. That's where I stir up the shrimp and then drop it into special spices that light up your mouth.

I then took him to Ohare for his flight home.

Seems like a lot of driving but having a friend for life makes it no big deal. Oh, on the H-Man wife search subject, he has a few girlfriends out there. That may good enough. His life is pretty good.
Posted by Let's Find H-Man A Wife at 7:22 PM