H-Man on Diners, Drive-Ins and Dives 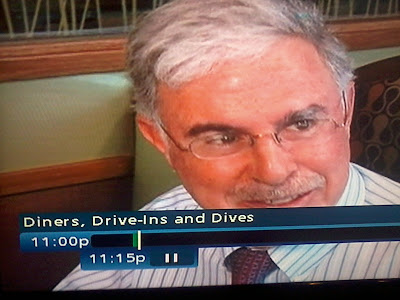 We are big fans here. It's Guy Fieri's show on Food Network. Of course diner in itself is a scary word. But this show gives me new hope. Good cooks all over the country open up small carry-outs and do great things. So the boys and I were watching one night last week and it's a place in Virginia. I made a point that this is a place that H-Man might visit. This dive did a good job and made French Toast thus giving me subliminal advertising so I made French Toast the next morning.
Late in the show, H-Man is interviewed while enjoying his meal. I start screaming. The boys all scream loudly at 10:30 at night. There is our friend on television.
So I texted and then called H-Man. He said it was filmed last November. He said it took three days for the show to get the episode down. He really didn't think they would use his quote. Of course everyone says good things. What if the food was really bad? "I just broke a tooth on this,'' he said. Or "I wouldn't feed this to my dog,'' she said. I guess that's why they tape it in advance.
Oh, the boys and I took in a diner in Des Plaines named the Paradise Pup that we saw on the show. It was smaller than a closet but the burgers were super. I guess I'm officially a member of the Diners, Drive-Ins and Dives cult.
Posted by Let's Find H-Man A Wife at 6:15 AM