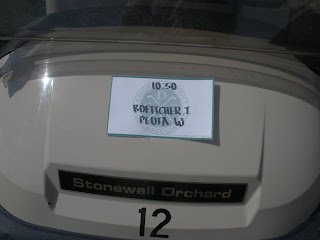 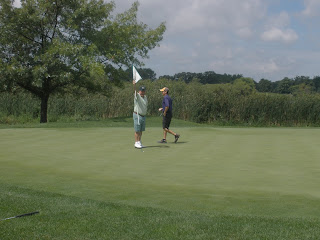 Yes, it's very hard to talk about my golf tournament without bragging. But I will try. This week marked the 12th Pioneer Press Foursome Tournament. 17 golfers came to a gorgeous course in Grayslake called Stonewall Orchard. There they played 18 holes free of charge. I collected three gift certificates from the cool restaurants of Lake Forest known as Southgate Cafe and Bank Lane Bistro. I also had a heavy trophy from Awards and Engraving of Libertyville for the winner. The players involved had their names written on their golf carts. Despite threats of rain, it was totally dry. I was the only reporter in attendance so I got all the news.
Flash back to 1997. My good boss, Kevin, asked me what I wanted to report on during the summer. It came to me. I had married Eileen and her father, Marty, had tried in vain to make me a golfer. So I say, how about Marty and I go out golfing with the two best players on each golf course. Switch to the phone. I called golf courses. They eventually got back to me. This Pioneer Press Foursome golf program was inaugurated. A year later, a course in Mundelein (now torn up) offered to host my tournament of the players I had golfed with. It rained hard that morning but the players dressed for it. The next year, I did the same thing. But I made an almost fatal mistake. I didn't invite the players from the past year. I had four players at the tourney. One got hurt and I was left with three. I thought of the scene in Gone With the Wind when Scarlett O'Hara proclaimed she would never be poor again. And I would always keep a list of my players.
The only requirement for this tourney is that a golfer plays 18 holes with me. I take notes and golf terribly at the same time. In the tourney yesterday, golfer Ned ripped off a 32 on the front nine and prepared to claim his first tourney. Alas, he had a tough back nine. Golfer Chris (who is very good) won his third title with a 71. Yes, this is another reason, I hold on to my job at Pioneer Press.
Posted by Let's Find H-Man A Wife at 6:02 AM