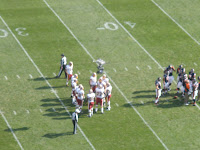 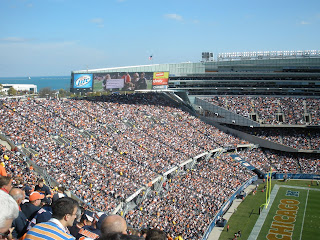 "We want Billy" and "We want Sonny" were the bumper stickers I would see in the DC area. That's because we had two excellent quarterbacks in Billy Kilmer and Sonny Jurgensen. I just loved Redskins football. I recall back when we were terrible but it was still fun. But then coach George Allen arrived. The Skins started to win.
When I moved to Chicago in the late 80s, I missed my hometown. So it made me feel really good when the Skins came out here and hammered the arrogant Bears of Chicago in the playoffs. Bears fans love that great Super Bowl team of 85 but my team has Super Bowl titles in 1983, 1988 and 1993. And all we say is "Hail to the Redskins."
Well, the Skins came out here last Sunday and Brady and I went. We took the Metra train to the city and hopped on bus to Soldier Field. Our overpriced tickets were on the 10-yard line in the top deck but we could see everything. It was a dreadful game. Both teams stunk. The Skins did win but I took very little joy out of it. What's interesting is during those commercial breaks on TV, the players just stand around looking at each other. Unlike baseball where they toss the ball around the infield, they do nothing. Riley and I have tickets in early December when the Patriots come out here.
Posted by Let's Find H-Man A Wife at 1:22 PM