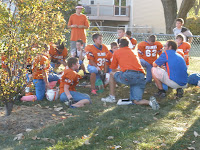 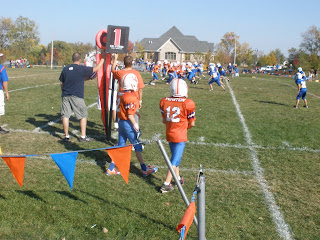 Been through the wars of kiddie football. From the excitement of seeing your kid catch a touchdown pass to the tears and comments that this team is no good and your boy wants to quit.
Concussions have been in the news lately. I asked a doctor a few weeks ago if they should warn parents about the dangers of football and concussions. He whispered something to the effect that doctors could wreck football with such an order.
Our experiences have been mixed. I'm not one to paint my windows with Flames colors and slogans and ring bells for the stinking team. I will cheer when appropriate and stay away from negative stuff. This year has been tough. I actually wrote an email to the coaches (no reply) in which I stated my wonderful boy (yeah, right) has been misused and should be a star. The team mom replied that everyone has been writing the coaches complaining. And then a parent stopped by and said he heard there was a mutiny on our team.
I get it. It's not the sport where everyone gets to be a star. Sometimes, you just have to block for the other guys.
But how fun is it to just root that your kid doesn't get hurt?
Is is right to make young kids practice three days a week during school?
I think I will stick with baseball. Everyone can be a star.
Posted by Let's Find H-Man A Wife at 1:44 PM