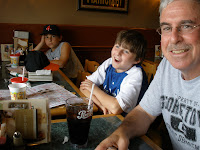 Now I don't mean to scare all those eligible ladies out there but H-Man does have a girlfriend. Her name is Cynthia. She is a former American Airlines flight attendant who is keeping H-Man company in DC. The most striking thing he told me about her is the number of funerals she attended after the attacks of 9-11. We forget about all those flight attendants who were murdered that day and the friends they left behind. Anyway, H-Man had another trip to Chicago last week for a meeting with his fellow dentists. We seem to have our watches in sync as I always pick him up at Ohare. We time it almost perfectly for when he picks up his bag, I am just pulling it in. He was laughing when he spotted my No. 1 Orioles fan license plate on my old Camry. I took him downtown where he checked into his hotel. We had a meal and some drinks and talked until after midnight. It did take me about three bars to find a decent beer. Yes, I had to blast my IPOD on the way home to keep me awake. It's fun knowing the H-Man will be visiting Chicago a few times a year.
Posted by Let's Find H-Man A Wife at 8:58 PM