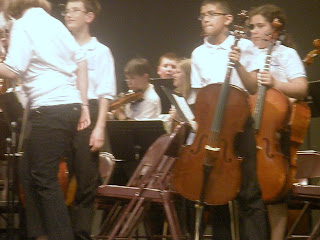 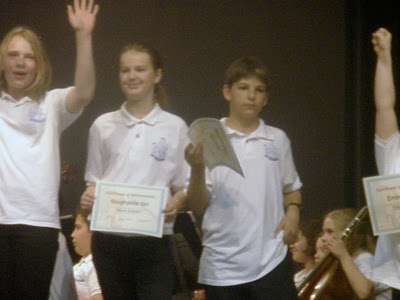 I can recall traveling to day care with a very young Brady. That's close to 12 years ago. And to entertain him, I had a Buzz Lightyear and Toy Story CD playing. We were moving along when the CD moved on to some instrumental music. And then Brady started wailing. What's wrong, I thought. Brady told me that Buzz was in trouble. Huh? There were no words to that effect. He wasn't happy though.
I was talking to my friend Eddie about that incident. Eddie told me that Brady had musical memory. Our first child was able to tell what was going on in the movie just by the music in the background. Wow!
And maybe that's why he hangs on to the violin. Anyway, the so-so pictures here are of Riley's farewell concert. He was handed the viola and told to follow in his older brother's notes. Simply, it's not his cup of tea. He wants out. Nothing personal but he just doesn't like to play an instrument.
What's my musical history? I listened to a record player when I was young. It never came up. Between Little League baseball and watching television, I never picked up an instrument to play it. I wonder what happened. I did make up for it by buying all those records, tapes and CD's.
Posted by Let's Find H-Man A Wife at 11:03 AM