On Kiddie Football and it's all good 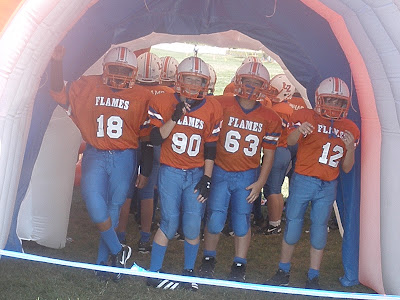 Ah, kiddie football. No one really gets hurt unless they break a bone or have a concussion. It's all fun. We've mostly enjoyed our days watching the boys play football. Of course, I once came up to Brady and barked, "There is a long drive to left field and it's going, going, gone. No, it's called back because of holding."
The point is penalties kind of hurt the sport.
This season has been a blessing. Our fine coach recognized that Brady could do some good things with a football in his hands. This isn't baseball where everyone can be a hero. In football, there are blockers. Those kids are very important but no one really knows who they are. That's Riley's job. He does it because it's helpful and he's a strong kid.
Yesterday, Brady had a pair of interceptions and scored a couple of extra points. That's a good day. His younger brother was so excited when it was announced that we were so far ahead that he would get a chance to carry the ball. Of course it was Riley's turn to do that and someone on the line jumped so his carry didn't count. Oh, well, it's the thought that counts.
Here's hoping the boys stay healthy and have fun. And thank you coaches.
Posted by Let's Find H-Man A Wife at 10:01 AM