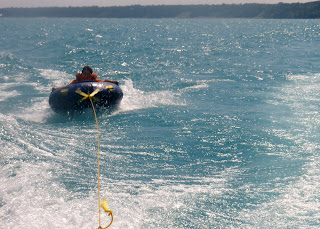 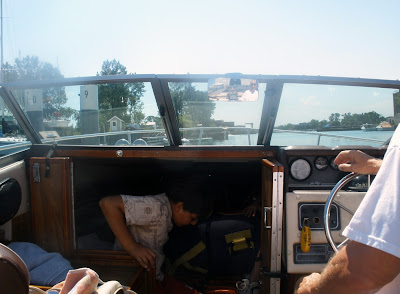 It's a distant memory now. My dad did have a small motor boat that we would take slow rides on the Potomac River. I recall a dreadfully long voyage to an amusement park a good four miles down river.
I got older and met the H-Man. He really had a boat. I mean a real boat. It's actually a good way to travel. It's complete recreation if you are the passenger.
In the Midwest, we've been on Captain Terry's boat in Traverse City, Michigan, Captain John in Lake Geneva and of course Captain Bob in Lake Bluff.
Friday afternoon marked an almost perfect day. We drove to Captain Bob's house and he took his boy's Ford up to Waukegan. He treated us to a fine lunch at the Waukegan Yacht Club. Nolan was especially impressed with the clam chowder. And then his boat was ready to be boarded. We had a bumpy ride on Lake Michigan heading to a place to go swimming. If I didn't know better, I might have thought it was National No-boater day. There were no boats out. The four of us jumped in the warm water and tossed the football around. And then it was time for tubing for the boys. Each boy had two turns being dragged along the lake. Of course I was a tad nervous to see my children tossed and turned but they survived. After this exhaustion, we headed back to land. Captain Bob treated us to ice cream despite my protest. Nice guy. All three boys said awesome and other superlatives to describe the magical day on the water.
Posted by Let's Find H-Man A Wife at 7:33 PM