Anatomy of a book write 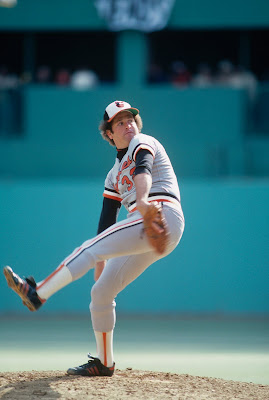 Who writes a book when they are angry? I suppose many. It was 2003 and I was fed up. My paper had fired the great TJ Brown and in a public relations disaster let prized reviewer Virgina Gerst go.
I told Eileen I had to do something. I was going to write a book. Now how does one go about that task? First, a topic would be good.
Let's go back to 1980. My dad was dying of Lou Gehrig's disease. I had a dead-end job at the Voice of America. I had been diagnosed with Ulcerative Colitis. But I did have that special team in Baltimore to keep me entertained. The Orioles were great. I remember that August asking my great friends Mark and Eddie to turn on the radio because Stone was pitching on the coast. He had a no-hitter in the eighth.
Steve Stone was a below average pitcher who toiled for both Chicago baseball teams in the 70s. I remember laughing out loud when the O's offered him an extra 10 grand in any year he won the Cy Young Award. The truth was he didn't have a prayer of winning that award. That was reserved for great pitchers not him.
And then he captured some magic. He had an incredible year. So that was it. I would write a book on that stunning season of his. The folks at the Lake Zurich Library were great to me while I was researching. And then good news came from the East Coast. The 1983 Orioles were having a 20-year reunion of their World Championship. Eileen blessed my trip back East. I of course hung out with H-Man and Joel. I headed to Baltimore for serious study of all the Baltimore Suns and Washington Posts. And then on that Sunday, I took Eileen's tape recorder and interviewed a good handful of the Orioles players and coaches. They had the same feeling I did. How did that Stone guy win 25 games?
I was ready to write. To be honest, looking back, my second chapter was crap. So I had to make changes. I found a publisher in Toronto who was interested. Another Nebraska publisher was excited. A self-publisher in Baltimore wanted it but I had to pay for that. They all went away. I even got a literary agent involved but he couldn't sell it. Why not? It's a rags to riches tale.
Finally after all the heartache, TJ Brown stepped up and edited the darn thing and together, mostly him, we put up for sale on Lulu.com.
It's for baseball fans. Now it's up to me to sell the darn thing.
http://www.lulu.com/browse/search.php?fListingClass=0&fSearch=A+Stone%27s+Throw+by+Bill+Pemstein
Posted by Let's Find H-Man A Wife at 7:00 PM