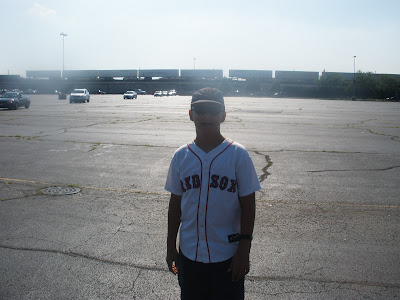 Now, I get it. Carlos May is the only Major League baseball player to have his birthday spelled on the back of his jersey. May 17. He was also the Sporting News Rookie of the Year in 1970. Van Horne, played several seasons in the NFL as a tackle and was on the Super Bowl Bears team of 1985.
Now on with our day. Riley and I bought tickets to the Red Sox-White Sox game on Saturday. It was in memory of my dad who died of Lou Gehrig's Disease 30 years ago. The former players were in attendance to help awareness of ALS. We were in the Miller Lite box (I wouldn't drink that beer if I was dying of thirst). Anyway, we had a nice time. Riley and I went up to Mr. May and Riley was horrified that I asked him about his older brother, Lee. Ah, the Big Bopper, Lee May. I also brought up that the great Brooks Robinson robbed his brother Lee of a certain double in the series of 1970. Next up was Horne. Riley was wearing his Red Sox uniform and Horne wasn't happy. I added that Riley was a Patriots fan, too. Horne went back to his meal.
Riley was certainly happy as his Red Sox put a hurt on the White Sox. The food wasn't bad in the box with somewhat fatty but tasty pulled pork. Riley feasted on the pasta and fruit.
It was all for the fight against ALS. I hated to break it to them but 30 years later, they still haven't found a cure for this misery. I still recall how my dear Grandma drove up to see her only son, only to be cut off at the door at the Veteran's Hospital telling her that her boy had died.
It was important that Riley and I were there that night. And sorry for the insults players but we have other teams that we root for.
Posted by Let's Find H-Man A Wife at 6:52 PM