It hit the stupid wire up there 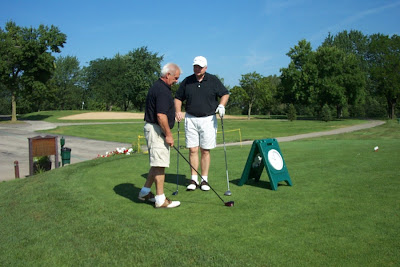 OK, I did write about this on that work blog before those yahoos shut me down. I was always about baseball, football and basketball. I don't think I even tried any other sports. But here I was living in Laurel, Maryland and bored out of my mind. I met a friend in the neighborhood, Roger White, and we began to experiment with golf. I think I must have gone to Zayre and purchased a five-iron. We also had some plastic balls. So we went around the neighborhood hitting shots through trees and bushes. Believe it or not, we got pretty good at it.
So what was next? Yes, a real golf course. It wasn't expensive but we had to rent clubs. I took my first tee shot of my life and the ball soared high and deep. And then it hit a wire and came straight down. What a disappointment. It began a very difficult day. Our scores vaulted over 100. Naturally, we ran out of golf balls quickly. But in better news there were plenty of balls on the driving range.
Our round finally concluded and so with it any dreams of a career in golf. And then the pro in the office asked his wife to come close to us. "Take a good look at these boys,'' he said. "They are never allowed to play here again. They have been taking balls off of our driving range."
Now that was adding further insult to our sad day. So, I said, "Come on Roger, we don't want to play here anyway. They don't have any greens. They only have browns."
I did rediscover golf later in life, hence the picture of some of my tournament players, and enjoy the game very much.
Posted by Let's Find H-Man A Wife at 11:17 AM