Just for a cup of coffee? 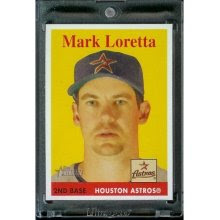 At Pioneer Press, I covered the College of Lake County baseball team especially in the golden years of that newspaper. Those Lancers had some good clubs. One season, my neighbor Mark Ledinsky and teammates Brad Dodge and Tim Unroe starting clobbering home runs on a regular basis. Flash forward to the year 1995 and there is Unroe now wearing the jersey of the Milwaukee Brewers baseball team. How fun. So I took the trip up there and got my press pass. I had never interviewed Unroe but he knew I was a local reporter who knew about his past success. The talk went well but I knew full well that my boss wanted another source for the Unroe story.
So I wondered across the locker room and spied infielder Mark Loretta. He would go on to play more than 1,700 games in the Major Leagues. After eight seasons in Milwaukee he hit the road to Houston, San Diego, Boston and Los Angeles. He looked like a nice guy so I slipped over to his locker and told him I was from Pioneer Press and was doing a story on Unroe.
"Why don't you do a story on me,'' Loretta barked. "I went to Northwestern."
Ooops. Sure the Evanston Review was a big paper but I didn't work for that edition.
I told him that fact and he reluctantly gave me some quotes on Unroe.
Believe or not after I forget about Unroe, he went on to hit 3 Major League homers. His so-called cup of coffee saw him get 195 Major League at-bats. Take that Mark Loretta.
Posted by Let's Find H-Man A Wife at 7:24 AM